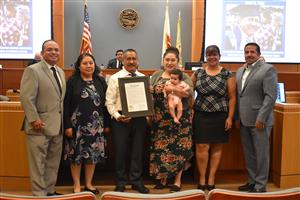 The 2019 CSU-Monterey Bay grad and former Salinas Adult School student was honored by Supervisor Luis Alejo during the Board of Supervisors meeting. Alejo, reading from the resolution presented to Mr. Gonzalez, praised the 58-year-old native of Oaxaca, Mexico for his inspirational story.

Alejo shared the story of how Mr. Gonzalez, an indigenous Zapotec whose native language is Zapoteco De La Sierra, traveled to the U.S. in 1986 to support his mother and siblings. He worked in the Salinas Valley, first picking lettuce before working 18 years harvesting celery. He eventually married his wife Maria, received U.S. citizenship and in 2000 earned his GED high school diploma from the Salinas Adult School.

Mr. Gonzalez’s first attempt at continuing his education at Hartnell College was stalled in 2003 due to family obligations. He eventually returned to Hartnell in 2015, earning his Associate of Arts Degree in Spanish with academic honors. He transferred to CSUMB and on May 18, he received his Bachelor’s of Arts degree in Spanish Language and Hispanic Cultures with honors.

“We hope that you inspire many other adults, farm workers, people who think that maybe it’s too late to achieve your goals,” said Supervisor Alejo. “You’ve shown them, at age 58, that you can accomplish anything that you set your mind to. You’re an inspiration to your community, and certainly we want to recognize you. On behalf of all my colleagues here, thank you…”

Salinas Union High School District Superintendent Dan Burns said it was a privilege to honor not only Mr. Gonzalez, but all of the staff and teachers who helped Mr. Gonzalez along the way. It was a testament to the Salinas Adult School’s commitment to students, a commitment that is now 101 years old.

“There are many stories of resilience in that amount of time that we’ve served, but none like the story of Adolfo Gonzalez,” said Superintendent Burns. “And every time I have an opportunity to speak with him, there’s another layer to the story that he talks about that just makes the hair on my skin rise because his story is one that can’t be compared to. It’s not just the story of resilience but the story of compassion for his family. On behalf of the school district, we thank you for honoring Adolfo with this day as a day in his name and his honor and we appreciate all of the support you provide for Salinas Adult School.”

Mr. Gonzalez thanked Supervisor Alejo and the Board of Supervisors for the honor, as well as his family. He also gave one last reminder that it’s never too late to pursue your dreams.

“Every time I have the opportunity to share and tell my community, I strongly recommend them to stay focused in school,” he said. “I strongly believe that if I can do it at age 58, I think everybody can do it.”