Near where he slept on a Salinas sidewalk Monday night, David Rodriguez, 39, regularly gets meals at Dorothy's Kitchen in Salinas' Chinatown.

He has not gone to the nonprofit's Thanksgiving festivity before, but he plans on going for the first time Thursday.

Born and raised in the Salinas Valley, Rodriguez grew up going to his grandmother's for Thanksgiving.

Homeless since 2012, Rodriguez said he considers many others in Chinatown – a neighborhood often synonymous with poverty – like his family.  The opportunity to share his childhood tradition with his new family would mean a lot to him, he said:

"Living out here is hard as it is," he said. "Thanksgiving would be like, just come together, have a good meal with one another, and kind of just enjoy."

He said the holiday meal would "have that feeling of when I was a child, you know?"

More: Where to share a community meal, and volunteer, in Salinas and beyond this Thanksgiving

As temperatures drop and rain is expected to pour in this week, a small army of volunteers at Dorothy's Kitchen have been working throughout the holiday week to ensure those like Rodriguez receive warm meals on Thursday.

Part of the local nonprofit Dorothy's Place that serves low-income and homeless populations in Monterey County, Dorothy's Kitchen has been running two-hour volunteer shifts starting at 7 a.m. and going at least eight hours each day leading up to Thursday.

The end result will be 1,000 full holiday meals. But that is in addition to the daily meals the nonprofit provides to some of the area's most in need.

Monday was the first day of Thanksgiving break for students in Salinas, and Dorothy's Kitchen had a dozen North Salinas High School students there to volunteer by mid-morning.

Students were receiving community service hours for their time, but it meant more than just fulfilling a high school graduation requirement.

"I also wrote an article on homelessness for my English class, so I want to be part of that and help out," said Santiago.

She focused on growing populations of younger homeless people, which she said has increased in northern Salinas.

In conducting interviews for her essay, Santiago said many told her they frequent Chinatown and specifically Dorothy's Place, a longtime Salinas nonprofit that incorporates the kitchen. So Santiago decided to learn more while on break.

Salinas was initially looking for community service but said, "This kind of interests me because I wanted to try something different."

Dorothy's Kitchen has offered a Thanksgiving meal for over 30 years, of which Nic Bianchi has helped on the culinary side on and off for two decades. 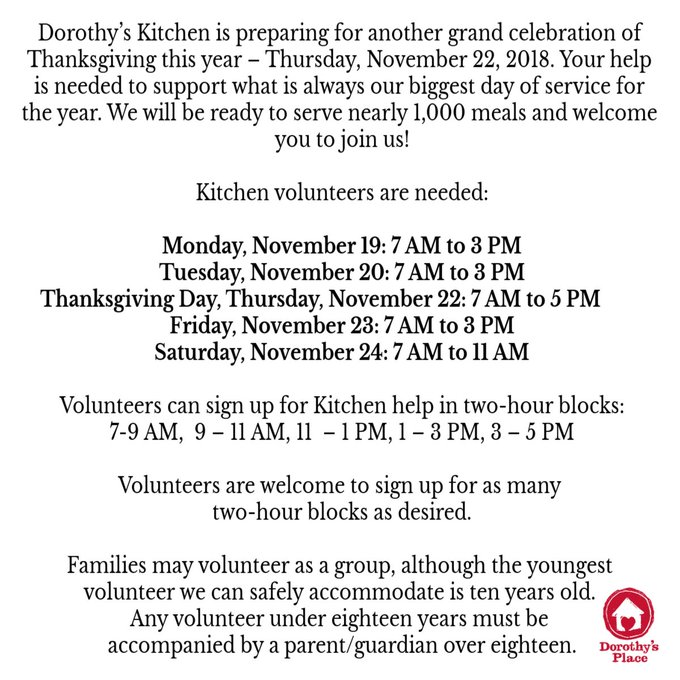 Dorothy's Place@DorothysPlace
Thanksgiving is coming! Check out the graphic below for details.
To sign up, please send an e-mail to our Kitchen Manager at john.newkirk@dorothysplace.org.

The director of Dorothy's Kitchen, Bianchi is overseeing the work of some 300 mostly high school-age volunteers leading up to the afternoon Thanksgiving meal.

“The thing about Dorothy’s is there’s something for everyone,” she said. “The best way to give of course is to greet the people and be with the people. But there’s also giving in washing dishes and organizing the pantry and cleaning. Some people are much more comfortable with that. That’s the beauty of this place.”

For example, Bianchi cites a mystery man who, for seven ongoing years, has donated 50 20-pound turkeys. Others take the turkeys home to cook and have them back by Thanksgiving. This helps especially since Dorothy's full-service commercial kitchen is small compared to the operation it undertakes this week.

For the holiday feast, Dorothy’s plans to serve pozole for soup – a crowd favorite, with the main entree of turkey, dressing, gravy and mashed potatoes. The meal will also come with dinner rolls, Waldorf salad, jello and pumpkin pie with whipped cream.

John Newkirk, program manager at Dorothy's Kitchen, adds ingredients to the mashed potatoes mix that will be served for Thanksgiving. (Photo: Eduardo Cuevas)

Volunteers come from all over to assist, Bianchi said, like students from De La Salle High School, a private East Bay Catholic school, who recently helped prepare the dressing.

She said preparing a feast is important for the local population.

"Because when you live like this, a very special day that is set apart from other days, a day of celebration is very important," Bianchi said. "But it’s important for the community to contribute. They have a hand in this."

Sitting with her aunt in a car on Market Way in Chinatown Tuesday morning, Chawni Piña, 32, said she uses services from Dorothy's Place but was not aware of the Thanksgiving meal.

This year, however, she plans to go with her three children.

"This is my family out here," Piña said of Chinatown. "It would mean a lot to me. It's a blessing."

She is looking forward to pumpkin pie, stuffing and turkey, though she said she has not really celebrated Thanksgiving before.

Thanksgiving is the only time of year that Dorothy's does not restrict people from taking meals to go, Bianchi said. Patrons can eat there and take meals home.

Diaz, the North Salinas restaurant careers teacher, brought 12 North Salinas High students Monday, some who were in her class and some who volunteered to join after hearing about the program.

This is the fourth Thanksgiving break she has brought students over, and her class goes six times per year. In mid-December, Diaz is coming with more students to help with holiday food preparations.

"This is not required. It's their choice to be here," she said. "One requirement I ask is go there because you want to help. Don't go with criticizing eyes."

One of Diaz’s students, North Salinas High senior Andrew Cortes hopes to go to culinary school and study restaurant management. Like many of his classmates, this was Cortes’ first time in the area.

The practice he is getting at Dorothy’s helps, he said, especially since he gets to put his learning from Diaz’s restaurant class into mass-preparing meals.

"This experience is more than captivating," Cortes said. "It's more hands-on because you're with the community, so it's more rewarding."

Food that is donated this time of year lasts the kitchen for months, thanks in part to generous communities and many agricultural companies that donate resources, Bianchi added.

Jessica Nedawar and her son, Brady, both of Pacific Grove, ready turkeys in advance of Thanksgiving at Dorothy's Kitchen. (Photo: Eduardo Cuevas)

During late fall and winter, Dorothy's gets a donated storage unit that acts as a makeshift pantry. Bianchi said having it is a blessing along with the regular freezer "packed to the door by the end of the holiday season usually."

At least this time of year, Dorothy's attracts food, resources and help that will make Thanksgiving possible in Chinatown.

But more can be done to help Dorothy's, which serves at least 300 breakfast and lunch meals per day. Often, insufficient resources keep them from using all the food donated.

The feast will take place from noon to 2 p.m. this Thursday.